Is it possible to install luminaires and rails yourself?
Both 1-phase and 3-phase rails can be installed by yourself. However, we recommend that you use our installation service that guarantees the best results.

We offer our installation service in all Baltic countries and Finland.

What kind of rails do you offer?
In our selection you will find 1-phase and 3-phase rails.

What kind of rail fit my space?
When choosing rails, it is worth first considering the height of the ceiling and the purpose of the space. It also depends on what kind of features you want from the luminaires. If the ceiling of the room is less than 3 meters, then most often 1-phase rails are sufficient, with ceiling heights of more than 3 meters we recommend using 3-phase rails.

Can rails be purchased individually?
Yes, it is possible to buy rails separately from other products.

What are 1-phase track lights suitable for?
1-phase track lights are ideal lights for using at home and small interiors. They can add value and interesting details to your interior design. Track lights are the perfect way to change the light design in your room, without spending money on expensive electrical repairs. They are also ideal in spaces where the design and furniture is changed often.

How many lamps do I need to illuminate the kitchen, living room and other interiors?
We determine the number of luminaires with each customer separately on a project basis. Each person’s home and needs are unique and individual.

Do you also have lamps with a replaceable lampbulb?
Yes, you will find in our range luminaires with GU10 lampbulbs.

What are 3-phase track lights like?
3-phase track luminaires are luminaires that are intentionally produced to illuminate large spaces like shopping malls, stores, galleries etc. 3-phase luminaires can be led on one rail to 3 different groups.

How much lighting do I need to light the space of my store or business?
The number of luminaires depends on the size of your company’s premises and the operation of your company. Designed lighting in the store will help promote your sales results and we will be happy to help you achieve the best result for your business needs.

Where should you install industrial luminaires?
Production luminaires are suitable for garages, factories, storage rooms, etc.

How can I make an order?
You can order our products from us by e-mail and we will be happy to help you get the best lighting solution for your space!

How can I pay for my products?
Payment by invoice only, on-site payment is not yet possible.

How do I know what you have in stock?
Our best-selling products are always immediately in stock however we advise you to consult us before ordering.

Can I order rails and luminaires separately?
Yes, all products can be ordered separately.

Can I order rails and lights together?
Yes, you can order all the products needed for the project together. We will also help you choose the right rails and luminaires to make sure everything fits together.

What are the terms of the project?
For the best outcome of the project, we recommend that you send us floor plans of your facilities (e.g. DWG folder) and tell us the purpose of the space so that we can give the best recommendations.

What are the forms of delivery?
We offer our customers the opportunity to come pick up the products or we can send the products to you by parcel delivery.

How long is the delivery time?
Delivery time for products in stock is typically 2-3 days. Larger and special orders may take longer.

How long is the product warranty?
We offer a 2, 3, and 5 year warranty on our products. You can find more detailed information about the length of the warranty in the information of each product.

How can luminaires be returned?
If you have a problem with our products, please feel free to contact us and we will find a solution to your problem.

What is the after sale service like?
We find out the right kind of service together with the customer, depending on the space and the products that have been used in the space.

Does the warranty include the cost of maintenance?
Yes.

Can I change the lights within the warranty period?
A broken or otherwise non-functioning product can be repaired or replaced under warranty without charge, depending on the product defect.

If I am still not happy with the product, will I get my money back for the returned products?
If you want to return the products and collect the money back, you have the right to do so within 14 days under EU law.

Can I request a consulting service if I am not sure what kind of products I want / need?
Yes, we consult you for free!

How is the consultation done?
We can help you if you email us, call us or you can come visit our showroom where we can present our products in more detail.

Is there a possibility to see the products before purchasing?
Yes, you can come to visit our office / showroom, Vesse 4, Tallinn.

Can I get test the products to make sure the luminaires are suitable?
Yes, if you are not sure about your choice, you can try what kind of luminaires would suit your space.

What special solutions we offer?
We have also carried out many special projects and have extensive knowledge of various luminaires. If you do not find the lighting you like in our selection, you can still feel free to contact us and we will surely find a solution for you!

Terminology
LED: Light Emitting Diode light emitting diode is a pn junction diode that converts electrical energy into visible light as well as optical radiation in the infrared or ultraviolet part of the spectrum.

COB LED module: Chips on Board is a common module consisting of one or more LED chips located on a board.

CCT: Correlated Color Temperature is the closest color temperature. Whether the light is perceived as warm, neutral or cool white.

CRI: Color Rendering is the color rendering index. A measure of how well a light source transmits colors. Also known as Ra.

Luminous flux: the amount of light coming from a light source or luminaire.

LED: Light-Emitting Diode, a light-emitting diode, is an electronic component that produces light in a semiconductor material. The LED converts electrical energy into visible light as well as optical radiation in the infrared or ultraviolet part of the spectrum. The forward voltage of an LED depends on its color – for longer wavelength LEDs (red) it is of the order of 2 V, for shorter wavelength (blue) it is ~ 3 V.

The invention and development of high-power white LEDs led to the use of light emitting diodes in the field of lighting, becoming a serious competitor to incandescent and fluorescent lamps.

COB LED Modules – COB: (Chips on Board) – is a common module consisting of one or more LED chips (usually nine or more) located on a ceramic or aluminum plate.

According to the technology, the shell-free blue diode chips are mounted directly on the chip and covered with a common phosphor layer. In this case, the heat dissipation from the transfer is significantly improved, which prolongs the life of the device. 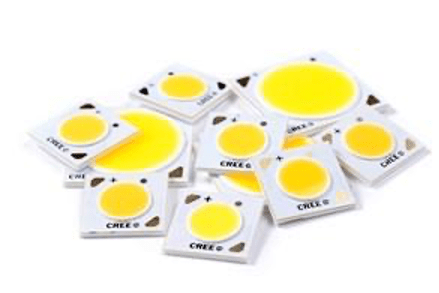 CCT is measured in Kelvin. LED luminaires are most often used at light temperatures of 2500-6000K. When choosing the light temperature, you should keep an eye on what kind of atmosphere you want to achieve. 3000-4000K is best suited for displaying products in retail spaces, 2700-3000K in smaller interiors such as homes.

A higher CRI number ensures less color distortion. If there is no part of the spectrum in the light, the colors corresponding to that part of the object appear gray or dim. 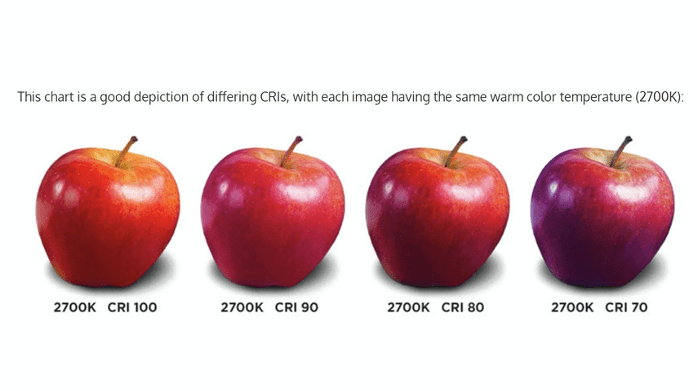